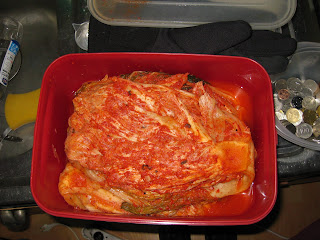 For those of you that don't know about kimchi, it's fermented cabbage in a red chili sauce and is also the national side dish. It actually dates back several hundred years as the koreans would store in underground for the winter months, let it ferment, and then get their vitamin c so they wouldn't get scurvy. I actually explained that to a Korean once, and she was like, "really? I just eat it cause that's what we do". Kimchi is so huge here that you eat it with every meal and it also gets a starting role in dishes like imchi ramen, kimchi stew, kimchi soup, kimchi fried rice, to name a few.

Some foreigners like it, some even love it, but on the whole, most don't like it, especially at first because it has a very different taste. I, myself, think it's ok but I wouldn't be proud to call it my national dish that's for sure.

Switching back to the story, one of the Korean teachers told Craig and I that someone, either a mother-in-law or friend made a whole bunch of kimchi, wanted to give some away and thought why not give it to the foreigners at your school. So she asked Craig and I if we liked kimchi, if we wanted some, and we were like "it's ok, not sure if we need some, blah blah blah".

A couple of days pass and I come into the teachers office to see two huge tubs of kimchi. One for the teachers for when we have our dinner break, and the other Craig and I to share. Awesome! Now the day it was there I honestly forgot about the kimchi but the 2nd night I didn't Then finally,last night, after having this kimchi sit in the office for a couple of days, I decided to take it home because I didn't want this teacher to get offended and Craig wasn't going to take it home.

So now, I have enough to last a Korean family one week, which equates to one year for me. And the thing with kimchi is that I eat it two times a day when I eat at a restaurant, and that's really all I need. And to be honest, I can't think of any food that I like so much that after eating it 2 times in one day, I say to myself, hey how bout another round? Blueberry pie included.

On a final note, tonight I'm heading to a Christmas party at the foreigners pub near my apartment. There is supposed to be turkey, ham, 2 kinds of mashed potatoes, roasted potatoes, stuffing, etc. so you better believe I'm pumped for that. Look for a follow-up/pictures sometime on Sunday or Monday.
Posted by chris at 11:42 PM

Oh, shoot. ...I needed your address because I was actually gonna send you some kimchee in case you didn't have enough.

Hey Chris,
It was very nice of you to not insult your teacher friend. Are they going to serve kimchi at the christmas party.
Do your students celebrate christmas? any special traditions? I'd like to share with my students. My students and Brenn and Quinn are getting so excited about christmas.
Love Aunt Karen

To my knowledge Christmas is spent by going over to a friends house or with family but there isn't the gift giving or anything along those lines. The Korean teachers have been going over Christmas Carols with the kids and I can here them attempting to sing "We Wish You a Merry Christmas" and "All I Want For Christmas is You". The next big holiday, to my understanding, is the Lunar New Year, or Chinese New Year, which is near the end of January.

Wow! My English is pretty poor for being an "English teacher". I can "hear" them singing the carols, not "here" them. I am awesome.

2 questions:
-Do they sell/give away kimchee at McDonalds?
-Do they sing "all I want for Christmas is you" like Mariah Carey?
Thanxs! :)
Happy Holidays!!

Doing and Getting visa vietnam .